AT&T’s recent FCC filing describing the two trials for all-IP services and removal of TDM contains some interesting perspective and revelatory details on how one of the largest providers of voice and data will firmly move into the all-IP world this decade. The end-of-life of the PSTN is coming soon and the cloud can play an important role in the transition for many service providers.

These trials will take place in two wire centers (out of 4,700 across the country) in former BellSouth territory. The proposed trials “seek a complete migration of all customers (or as many as possible) to IP-based services.” These trials are a learning process and are in service of the ultimate goal is to complete the IP Transition by the end of 2020 and sunset the PSTN.

In the filing AT&T states the obvious motivation:

“In short, the IP-transition is well past the tipping point, and at some point in the not-too-distant future it will no longer be possible to maintain traditional TDM-based telephone networks and services. The demand won’t be there, the economics won’t support it, and the parts and labor to keep these networks going will not be available.”

The most shocking revelation in the filing: AT&T admitted to finding spare parts for its legacy network on eBay. This is due to fact that the equipment vendors have stopped making or supporting that gear. The TDM network cannot be maintained for much longer as the equipment and expertise is vanishing. The many hundreds of traditional telcos in the U.S face this same reality.

This same end-of-life conundrum is also true of early generation VoIP gear. The transition to IP means that the technologies that power the infrastructure will be become obsolete faster than their TDM predecessors. While some of these TDM switches may be in operation for 20 plus years, the early softswitches and application servers from just last decade are no longer adequate or supported. Many vendors have outright disappeared.

This is why cloud voice platforms make sense. The all-IP SaaS-based solution provide continuous innovation without the buying, building and maintaining of a voice network. Whether transitioning from TDM or VoIP 1.0, the cloud is the solution for many service providers. By adopting a cloud-based VoIP service delivery solution, service providers can quickly move to all-IP with a safe and prudent business model: success-based, zero-CAPEX solution that aligns with their revenue streams. The end customer gets the same reliable, high quality service with a richer set of features. The service provider still owns the subscriber relationship and runs the business, but they don't need to run the voice network.

Some other interesting data points and claims from the filing include:

In other words, it is inevitable that over time circuit switched telephony will become irretrievably obsolete. And that day is fast approaching. Not only are customers abandoning circuit-switched networks and services in droves, making it increasingly uneconomic to maintain those legacy networks, but manufacturers of the equipment needed to maintain and operate those networks are likewise moving on. Those manufacturers want to focus their businesses on the networks of the future, not technology that is being displaced, and so they are discontinuing production of TDM equipment. As a result, it is becoming increasingly difficult to obtain needed spare parts to keep legacy TDM networks going.

We think the cloud voice platform will play a very big role for many hundreds of telcos facing that same PSTN sunset challenge.

Read more in our white paper. 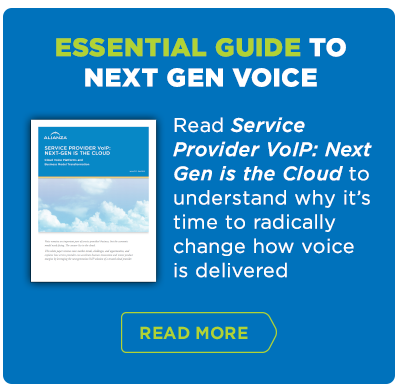 photo by: Tambako the Jaguar

Kevin Mitchell is Alianza's Vice President of Marketing. He once penned analyst reports and marketed VoIP gear but now he is infatuated with transforming voice from the cloud.